How to Open a Bottle of Wine? 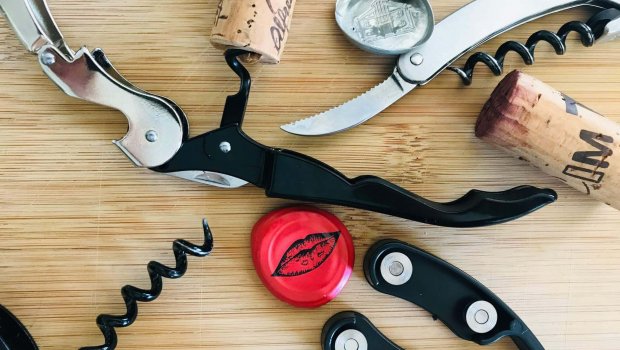 How do you open a bottle of wine? If you’re like me, you may have formed old (and technically wrong) habits, such as cranking and twisting the bottle, or slicing the foil upwards with any random knife within reach. Even though I’ve taken classes, have a WSET Certification, and have watched the videos, I still go back to my old loosey-goosey ways.

Does it even matter?

It doesn’t matter to me how anyone opens a bottle. I say just get it open injury and stress free, whatever’s easiest for you. Life’s short! Why stress over petty details? Let’s just open this thing and get to the wine. However, there are service standards and expectations, especially when working with the professional wine community, so, let’s revisit the norms.

A sommelier knife, waiter’s friend, or wine key is a corkscrew in a folding body similar to a pocket knife. It was conceived by the German Karl Wienke in 1882 and patented in Germany, England, and America. ~Wiki

The waiters corkscrew is an industry favorite tool, but you have to remove the foil first. Recently I was at a restaurant in Scottsdale, and ordered a bottle of Syrah. I cringed for the young man who was opening it in front of us (who was friendly and incredible at his job). The service standards and etiquette, especially when dealing with perfect cuts of the foil, makes me have respect for anyone who works in the service industry.

The foil cork closure, also known as the capsule, is the protective sleeve covering the top of a wine bottle.

He did textbook cuts with the little knife attached to the corkscrew (aren’t capsule-free and screwcap bottles great!?). But, as I’ve experienced often myself, it didn’t cut all the way through and he resorted to ripping it off with his fingers. It’s a lot of pressure using the perfect technique, and I told him that I’d probably have cuts all over my fingers and sweat profusely if I had to open wine in front of people all the time. He told me he does indeed have cuts all the time from the foil. I say use a foil cutter, just like the one demonstrated in the video below. Side note: Always be kind and patient with your servers!

From the Court of Master Sommeliers

Watch the Proper Etiquette and Practice

There are many blogs and videos on how to open a bottle. Instead of listing the steps, I find videos the most helpful. I happen to like the one below from Julien Miquel, of Social Vignerons. He demonstrates different methods and tools, and which ones can be used behind the scenes or in front of wine professionals.

However you choose to open a bottle, the most important thing to remember is that there’s wine inside.

The Vineyards Bed & Breakfast – An Oasis in Arizona Wine Country